Big push on things as I’d like to sail in PSSA’s Guadalupe Island Race, a good Cat 1 race to begin testing things. 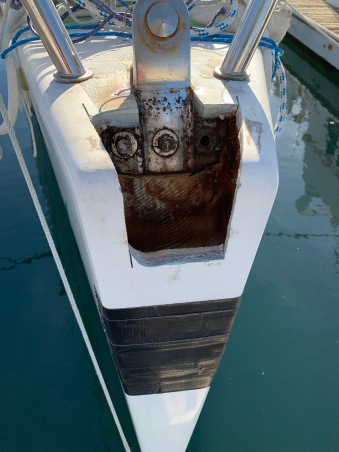 First The bow chainplate is in the process of having it’s bolts replaced with special Bumax bolts and thick washers, all torqued to 25 ft-lbs. Then the bow needs to be patched back up with epoxy. Since that cavity was full of water, I will put a drain hole in, rather than attempt to keep it sealed. Eventually water will get in.

While the forestay is unattached, I also removed the jib furler to replaced the bearings. The top swivel seemed very stiff. So after too much money and too many hours, the top swivel bearings are replaced and its back together. Lo and behold, the swivel is just as stiff! Now do I bother replacing the bearing on the lower unit?

The golf cart batteries have been replaced with the LiFePO4 battery I made up. A good friend came to help remove the lead-acid units and place the new battery. The battery is wired into the loads, and battery monitor connected. Power! I can tell already I will never go back to lead-acid.

The main alternator has also been installed, and will be wired up over the weekend. The regulator has been placed and will be connected and programmed also. Two unusual design points on my LiFePO4 setup. First, a switch in the alternator field wire to shut off charging while the engine is running. This is to leave the batteries less than full when I come back to the dock. Second, a high voltage disconnect relay will be installed to also cut off the alternator field wire in case voltage goes too high for any reason.

Still need to setup the battery monitoring board and get going on solar and hydro charging, but we’re getting there! I will post more on this when it’s up and running.

My friend also helped with placing the stern chocks for the drogue. Sparrow may be the only Open 50 to carry a drogue. With a single rudder it only seemed prudent as a way to control the stern if I ever lose the main rudder. It would be deployed before the emergency rudder is deployed to control the stern, and as effort to gain forward motion with headsails would be made before inserting the emergency rudder. Finally, if I ever do need to slow the boat down in severe weather, at least I will have the option.

Around the World via Southern OceanNovember 8, 2020