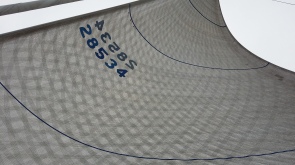 Departed Angels Gate around 5pm last Saturday evening and headed up to the West End in about 15 knots of breeze with reef in & the forward ballast tank filled.  I’ve much to learn about sailing an apparent wind boat upwind. Hard on the wind or foot off for speed? She sure likes cracking off, quickly shooting up to 9+ knots, but the tacking angles are ugly!

Around 11pm after rounding the West End and cracking off a bit, we ran straight out to the southern end of San Nicholas Island. Rarely has a better night been had.  An easy 10 knots in the warm summer breeze, the moonlight bathed us as we reeled off the miles.

Hoping to make it back Sunday at a reasonable hour, we spun around at 4:30am and reached back to the West End, arriving early morning in the dying breeze. Up went the Code 0 for the first time and Sparrow was easily exceeding the wind speed. Strange feeling to go so fast in so little wind!

Gybing back down to Angels Gate was a matter of rolling in the Code 0, gybing across and unrolling the Code 0. Arrived back at the gate by 3pm after a detour into Santa Monica Bay, an incredibly beautiful 22 hour trip, and I came away very impressed with Sparrow. Not just the speed, but the smoothness of the ride, and the relative ease of shifting gears.

With a little help from my dock neighbors getting back into the slip, I managed to get home, exhausted and smelly but at a reasonable hour to be at work Monday morning.

Around the World via Southern OceanNovember 8, 2020